Not many people come to Santorini to go hiking, but the island actually has some pretty impressive trails. The famous walk that many tourists opt to do at some point during their stay is the Firá to Oia walk. It’s not too treacherous, taking a leisurely 4 hours, and the path is easy to follow. The other paths that Santorini has to offer are not well-known, but should be on every traveler to Santorini’s list (another post on that later). 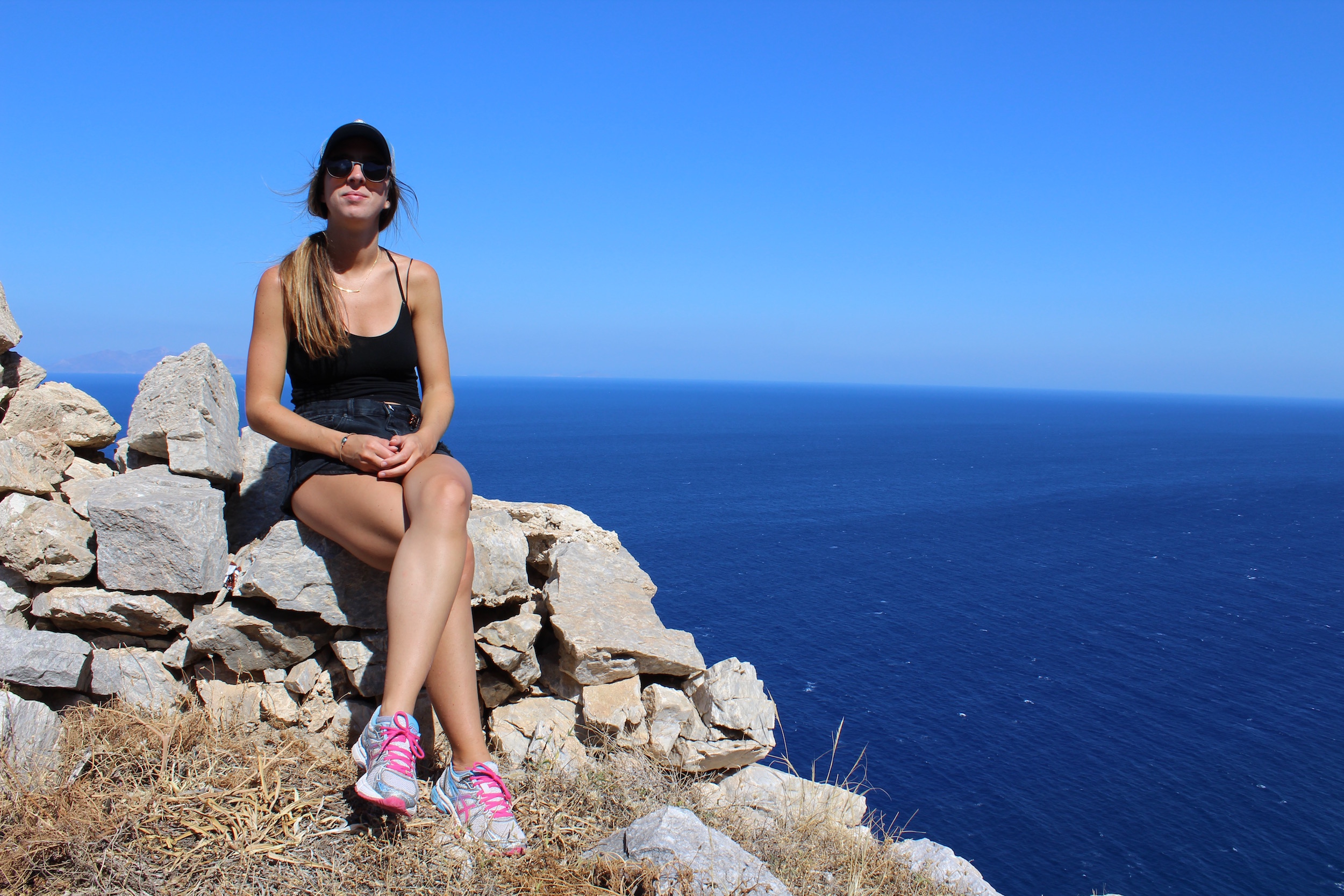 I had heard about the long-ago abandoned monastery, which is dug into the side of the cliff above the beach in Kamari and below Ancient Thira, but I never got the chance to walk the path until recently. The path starts from the beach, past a small church, accelerates quickly up the steep rock, literally along the side of the cliff, and then eventually to the abandoned monastery, known formerly as Askitaria. Askitaria comes from the word askitis, which means hermit.

The path to get there is ancient and was thought to be used by the ancient Spartans who settled the island around 9th century BC. The cliff that I’m talking about is called Mesa Vouno and lies between Perissa beach and Kamari beach. In ancient times, these two ports were often utilized so it makes sense that the Greeks would venture up and explore the massive cliff that separated, and still does, Perissa and Kamari. And so the path was born.

For a start, the weather was great so that helped the treacherous climb. It’s officially summer here in Greece, which means I can let my weather app rest for a while. I will expect sunny skies and warm temps for at least 3 months. I love it. And the nights are warm so no more sweaters. Anyways, it was hot and sunny and the hike started out at the beach so what more could I ask for?

I didn’t really know what to expect from this walk except that it would probably be tough going up-hill, but not for too long. I was right about that, but what surprised me was the sketchiness of the path and the steep drop off the side of the cliff. For one thing, I’m a clumsy person and don’t necessarily trust myself walking in a straight line or keeping my balance so the fact that if I had tripped or stumbled, I would have fallen very far and not to be too dramatic, but probably die or at the very least, be seriously injured. Nothing happened though, because I was very focused on where I placed my feet. 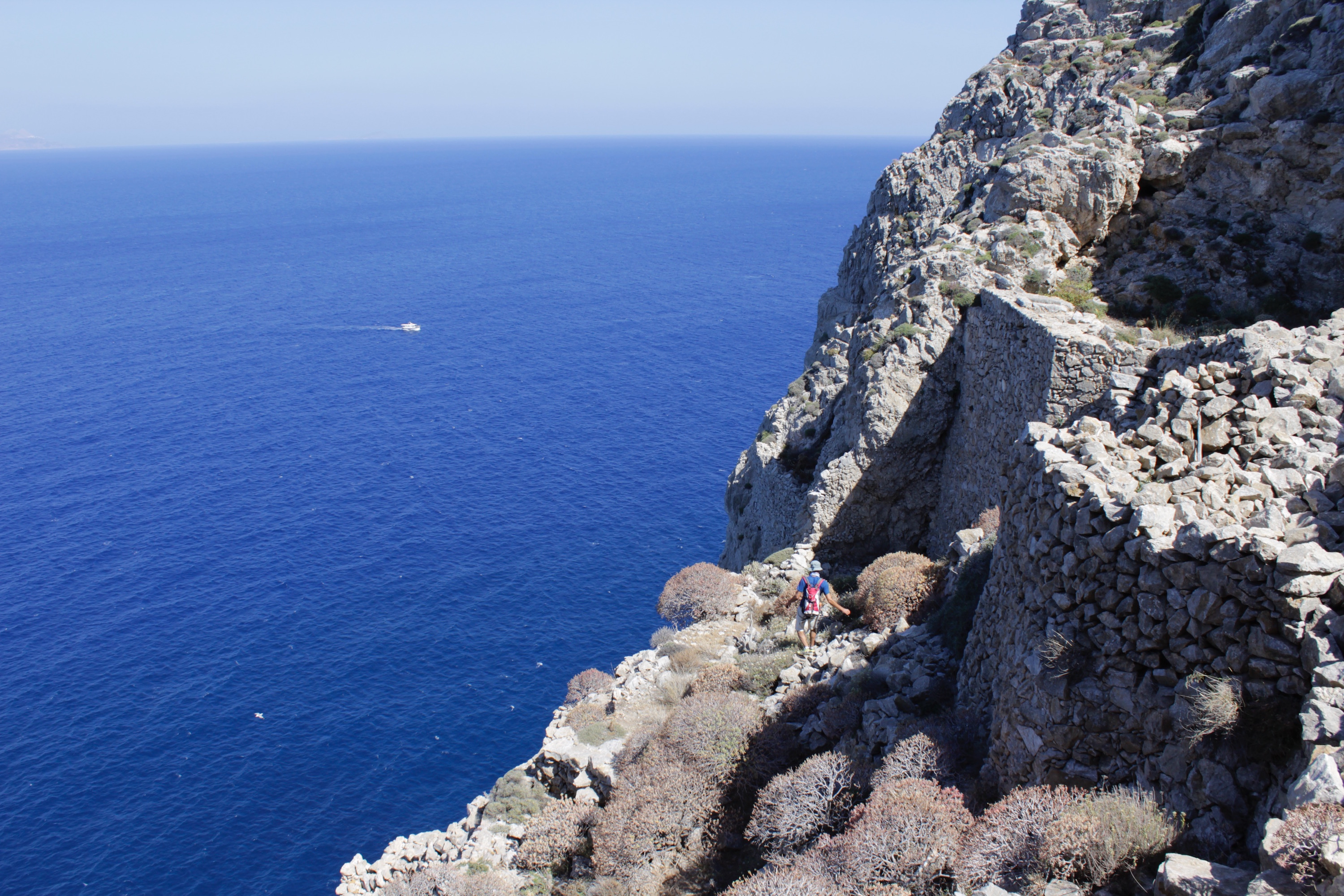 The second thing is that I’m scared of heights. If I’m up high in a building, or on a cliff in this case, and I look in any other direction besides forward, I get vertigo and become dizzy. I have to keep my eyes right in front of me and not look around. The path to Askitaria was very narrow, very rocky, covered with spiky bushes that made my legs look like they survived a cat attack, and did I mention it was on the side of the cliff? It was scary. But once we got to the monastery, which was founded around 1822 and abandoned in the late 19th century, it was worth the hike. 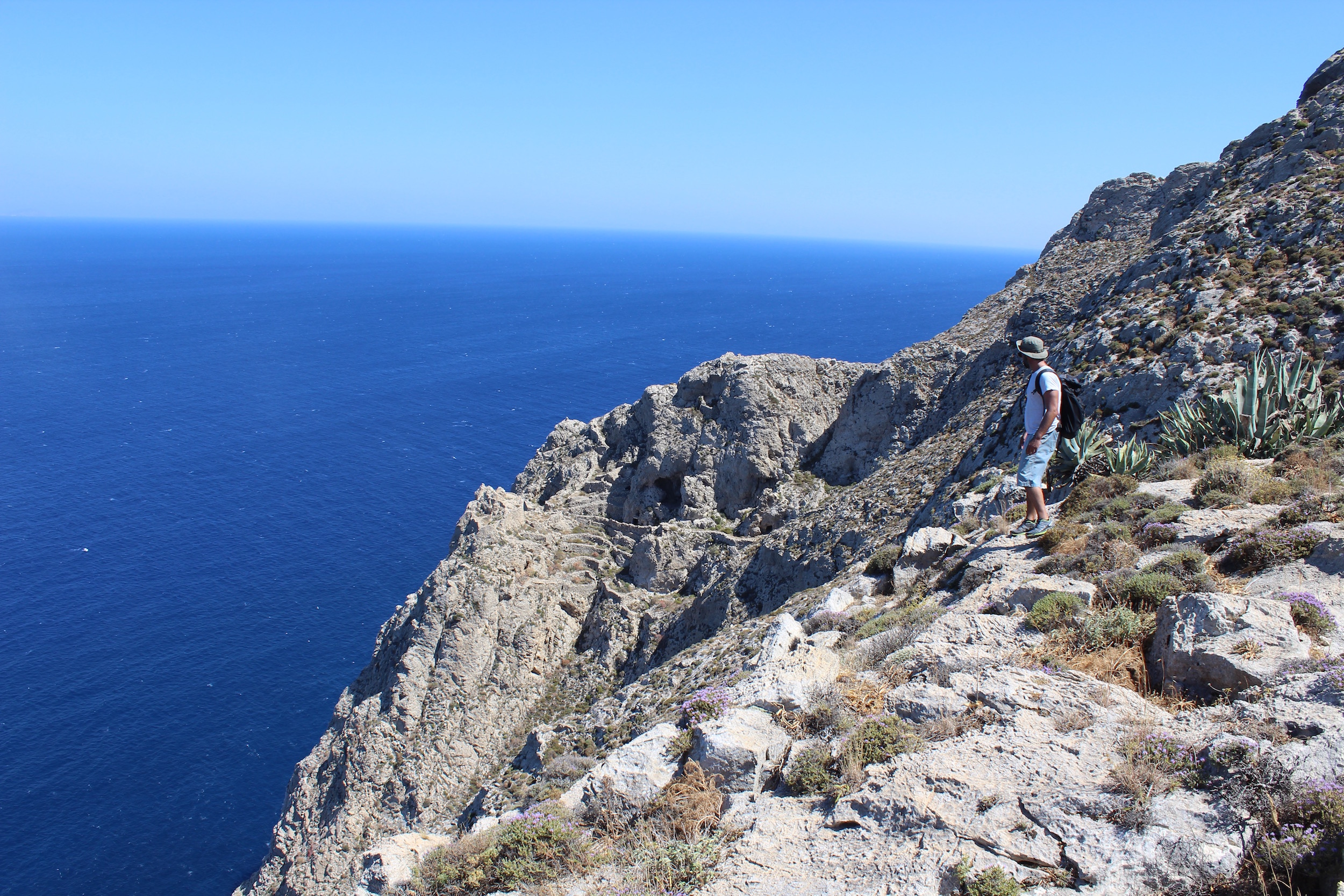 Tip for this hike: Be very focused. Try not to get your feet caught in the plants or bushes. And don’t trip on a rock.

As we entered Askitaria, I started seeing caves dug into the side of the cliff. Picture a very large rock wall protruding above the sea and dug into that rock wall is hole where people live. I am still trying to figure out how someone lived there, let alone how they actually made the cave. My best guess was a zipline and metal tools? 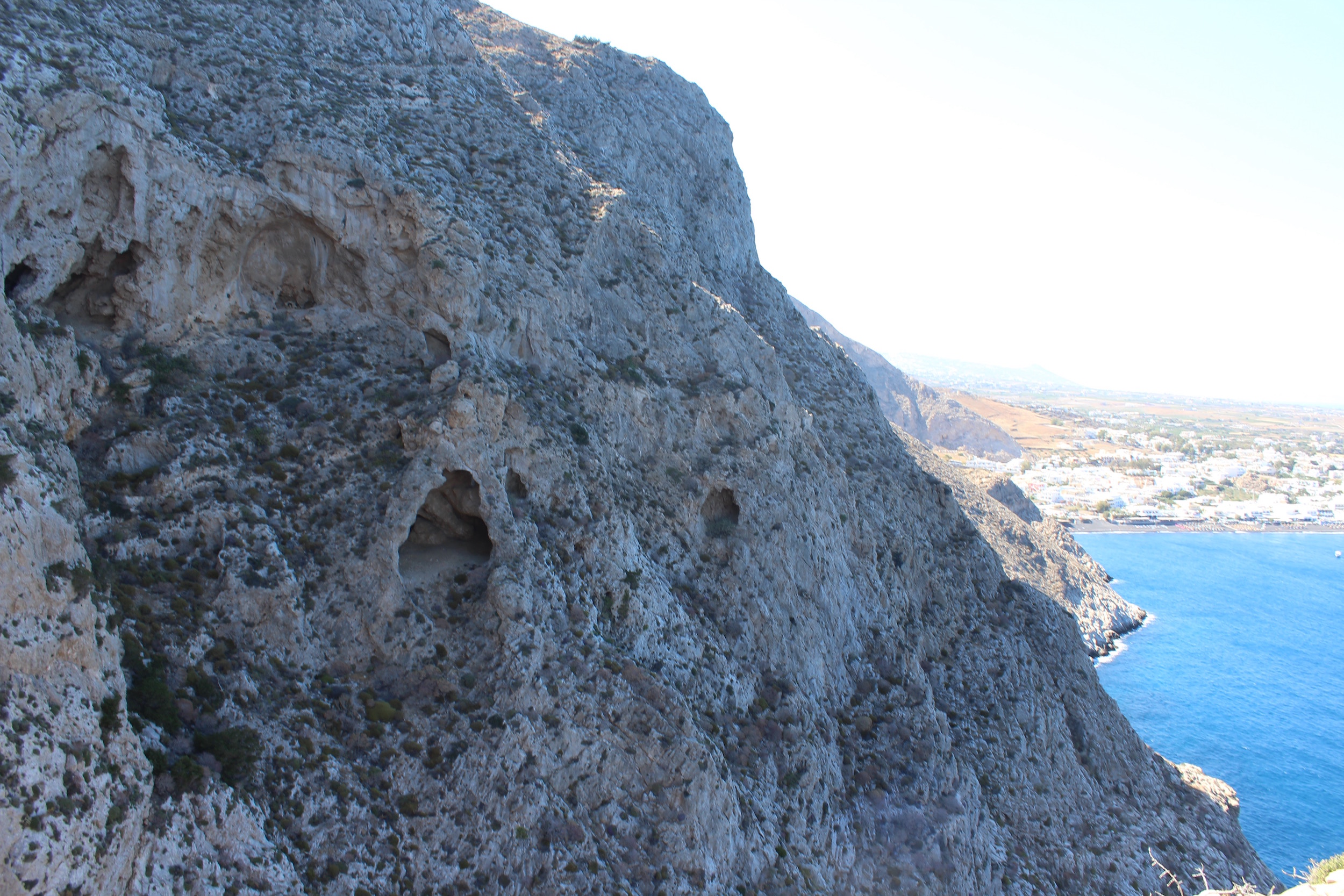 I learned that the Monks living at Askitaria got their supplies by boat from the sea far below. They implemented a system to get the supplies up the massive rock, however that system is no longer there.

As I got further into the monastery, which at first glance it wasn’t anything spectacular, but the more I explored, the more I found. I got to jump into an old cistern that is no longer filled with water, but the size of it was incredible. It was deep into the rock, I would say a flight and a half of stairs straight down, and the tank’s walls were made with a paste, a mixture of pumice, ash, limestone, water, Theran soil, and a little bit of sand. It is still considered to be an excellent mortar used for creating smooth surfaces and the Greeks would export this unique paste all over the world. 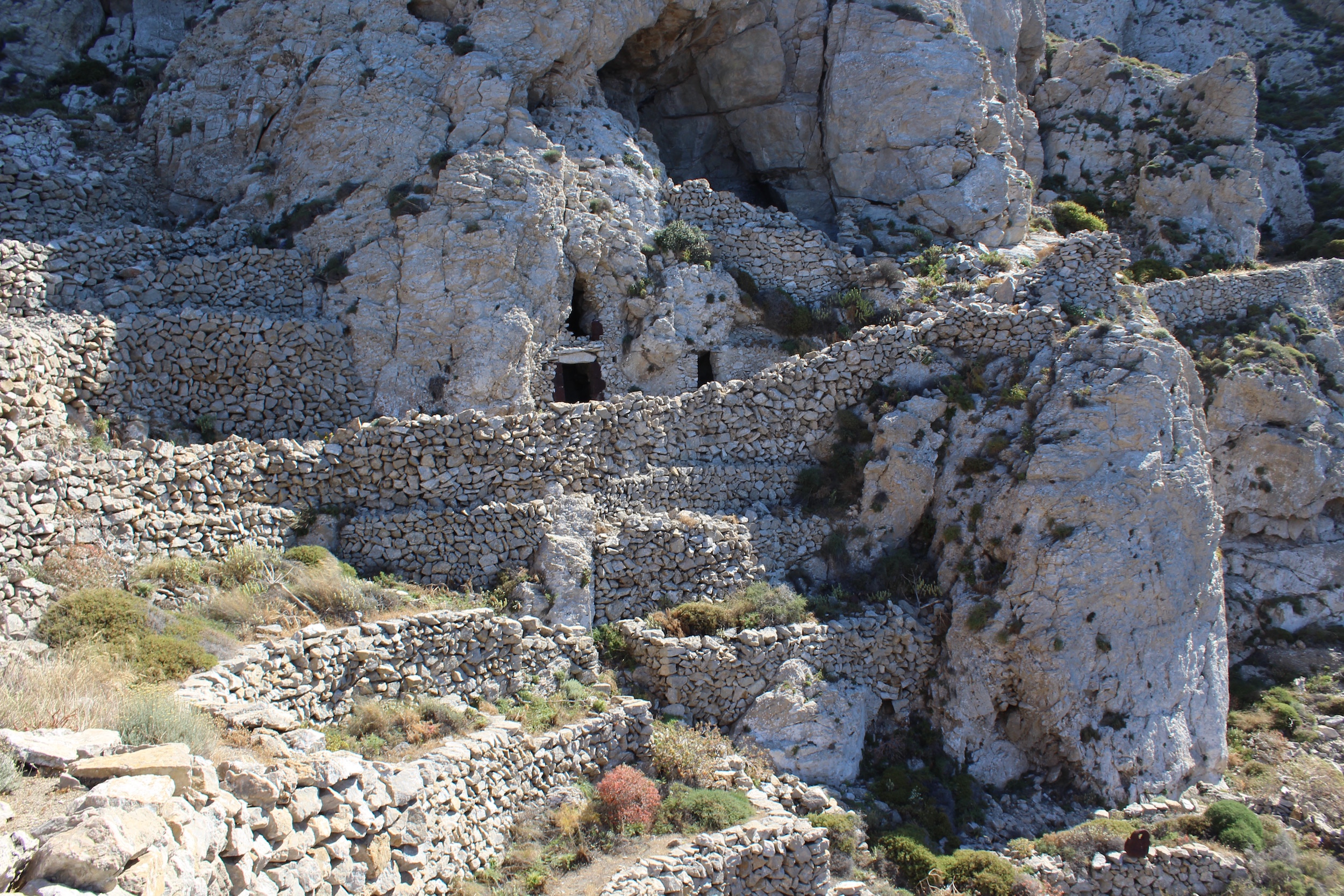 I also saw old terraced gardens, an archway made of rocks, and a few lizards. Mostly, I admired the views of the sea and watching the planes take-off and land. The flight path to landing in Santorini goes right over the beach. 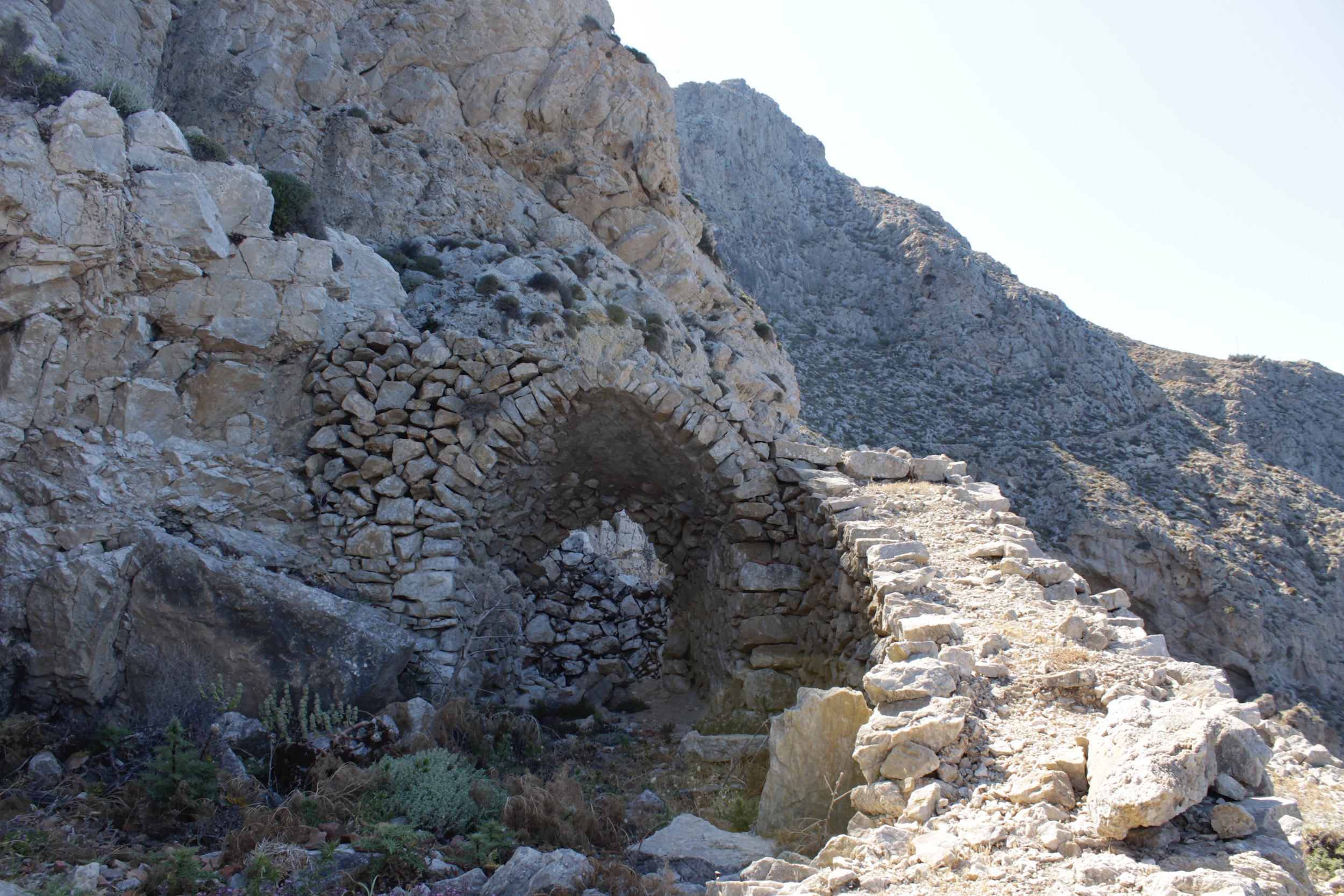 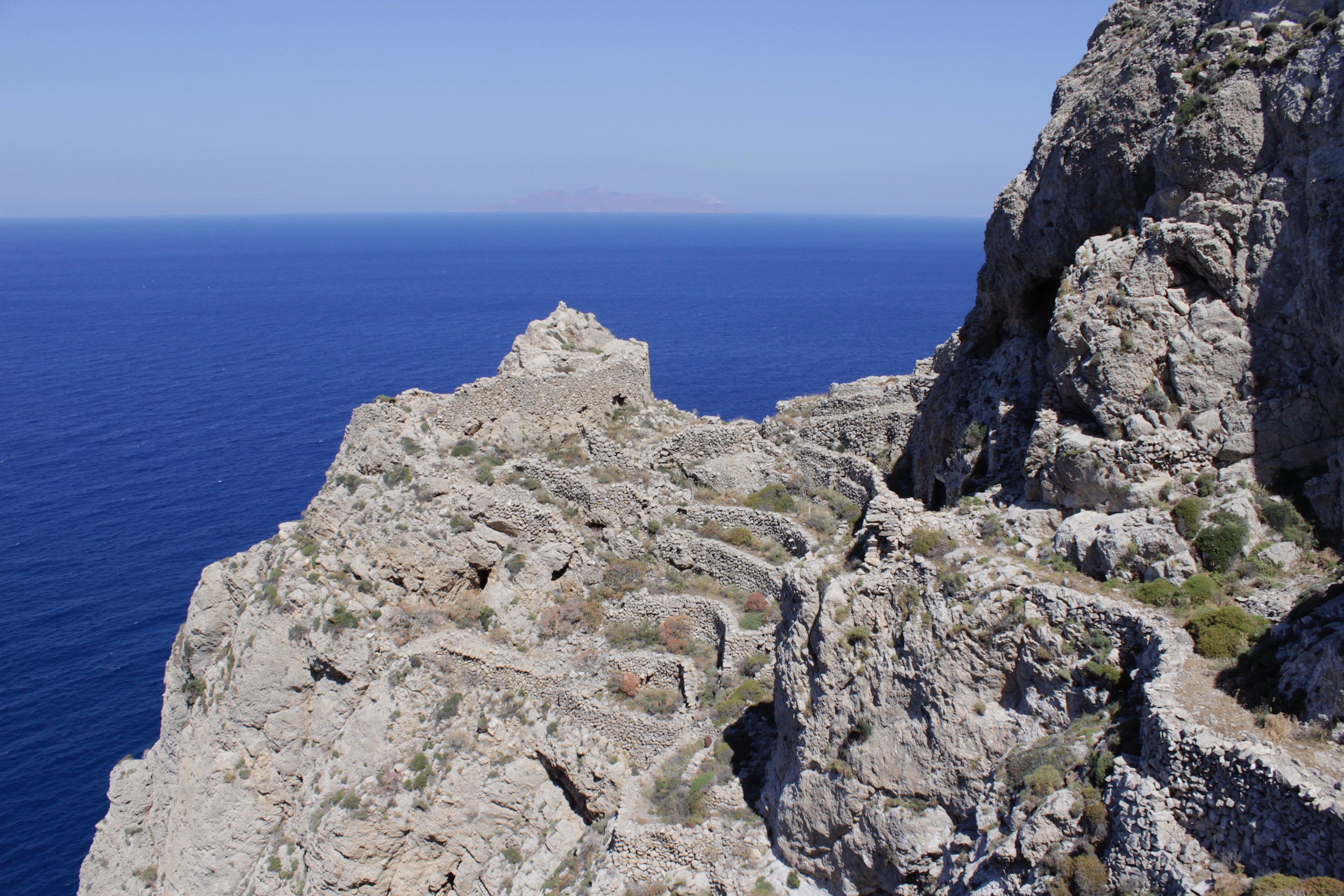 After snapping a few pictures and dodging spiderwebs in the caves, we turned around and headed back towards the beach. The walk back wasn’t nearly as scary, maybe because I knew what to expect and how to prepare. Remember, stay focused. And it definitely didn’t take as long to get back as it did to get there. The hike to Askitaria took about an hour to an hour and a half and backwards, it took about 45 minutes. 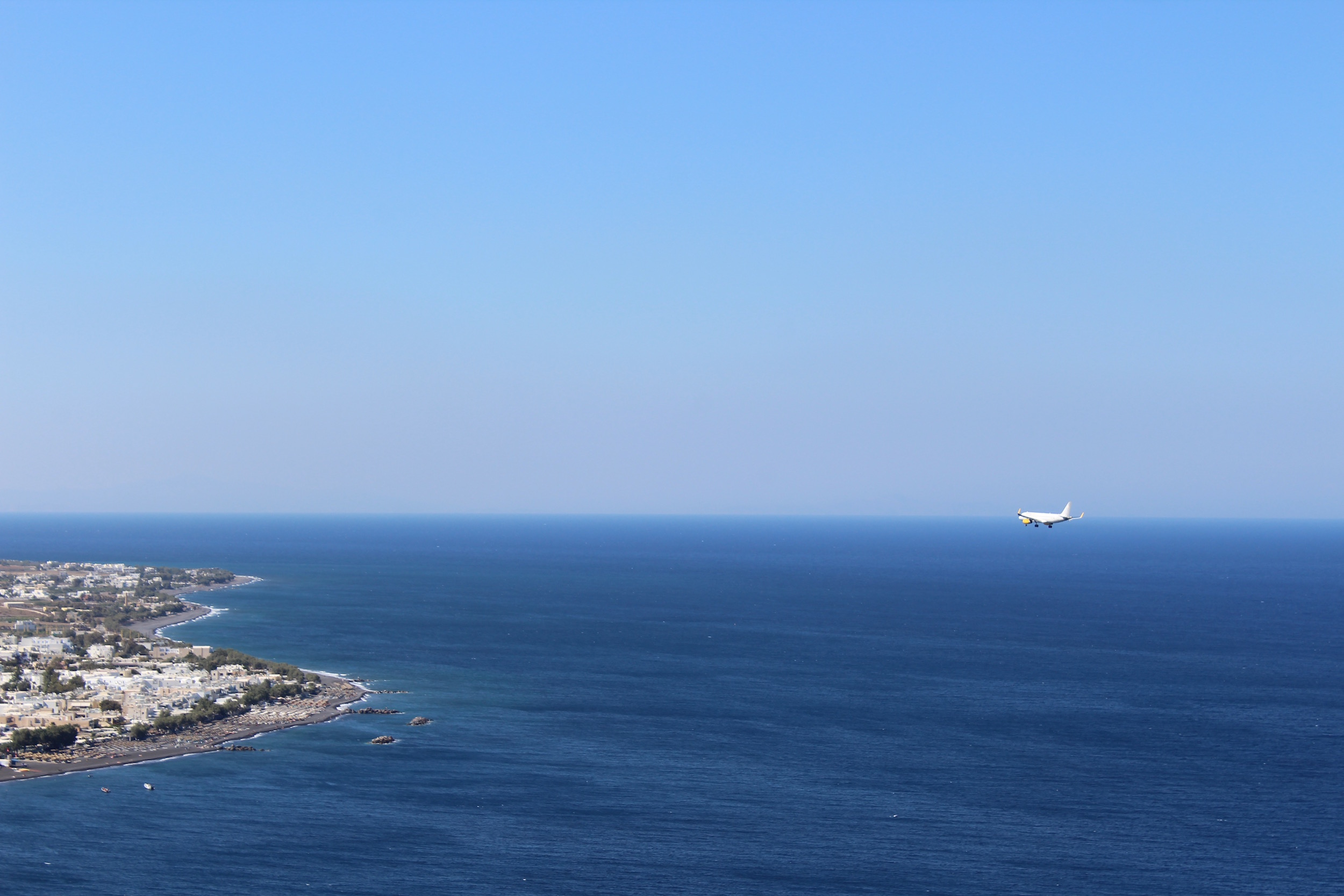 As we arrived at the beach, I made sure to be grateful nothing went awry, and then grabbed a beer at the beach cafe. All in all, it was a great hike and experience. I exercised, saw stunning views of Santorini and the surrounding islands, and got to see an abandoned monastery!

Recommended for: Strong walkers/hikers/runners, not afraid of heights, and in healthy condition

Not recommended for: Acrophobics, disabled physically in any way, people who have been drinking